Our NHPRC grant funded American Women Making History and Culture (1963-1982) Project is underway and there are so many incredible programs on their way to being digitally preserved. Since we're celebrating International Women's Day this weekend, I thought I'd highlight some recordings of international women that I've come across just this week! Several were recorded in the early 1960's so it's obvious how important and special these women are, and how lucky we are to have recordings of them in this great collection.

A wonderful interview of Simone de Beauvoir by Studs Terkel, recorded May 4, 1960. This recording was re-produced as a tribute to Madame de Beauvoir by KPFK producer Lucia Chapelle in 1977, but most of the original interview remains the same. This recording is being preserved long-term through the UC Berkeley Library with grant funds provided by the National Historical Publications and Records Commission. 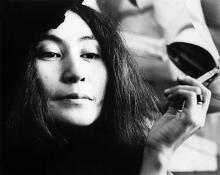 I'm LOVING this interview with Yoko Ono from September 11, 1971! It's part of our NHPRC grant project:  American Women Making History and Culture and has already been preseved through the UC Berkeley Library.  She talks about her art, her life, and the question "what is art" (John Lennon pipes in on this question). Plus the interview is by two women, which sets a unique tone.