The first part of a dramatic reading of the novel The Trojan horse (1937) by American journalist, essayist and author Christopher Morley (1890-1957). In this tragicomic retelling of the Troilus and Cressida legend, published in 1937, the 99.5 Radio Theatre tells a story that transcends the times, casually mixing periods to make a Troy as relevant to the 1960s audience as Saigon. Part 1 tells of Troy in the tenth year of Siege; of how Prince Troilus first sees the Trojan debutante, Cressida, at a pacifist demonstration led by his sister, Princess Cassandra; of an incident at Sarpedoni's, the roadhouse down by the Hellespont; of how Cressida's uncle Pandarus, the financier, arranges their meeting; and of a dinner party that Uncle Pan gives for King Priam and Queen Hecuba, and its consequences. Much of the action of the war is reported over the Voice of Ilium, the Trojan Radio Station.

The song, If, in Days of Sullen Air, written by Martin Last and sung by Alison Miller accompanied by Marilyn Scheuer. Technical production by Fred Friedman, assisted by Edgar Walker. Production assistants, Neal Conan and Ellen Jaffe. Script girl, Nancy Willner. Dialogue Director, Joanna Russ. Narrated, produced and directed by Baird Searles for Pacifica Radio and the 99.5 Radio Theatre. This recording was formerly cataloged as BB3830.10A and as BB3397A. 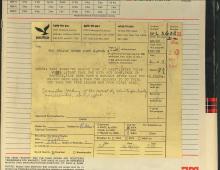