Some voices of the town (Episode 1 of 5)

The first in a series of five parts produced in 1965 by then-folio editor of WBAI, Marcia Tompkins, about her hometown of Tuscaloosa, Alabama. On this program, some voices from the town of Tuscaloosa are featured.

This series was lightly edited and re-broadcast in July and August 1970 (according to folio). This recording opens with a preface by Thompkins explaining why the tapes hadn't been rebroadcast over the last five years (1965-1970). She left WBAI in 1965 because of issues at the station and took the tapes, all except Part 2 of the KKK meeting with her. She says her reasons were because of her dissatisfaction with the station, and because they were subpoenaed by the House on Un-American Activities Committee (HUAC). Most importantly, however, was that the recordings very much upset her family in Tuscaloosa. Now that the family has "survived," she wanted to re-broadcast the 1965 series for comparison with her new series (upcoming in September 1970, according to folio) entitled "You must go home: 1970." (Archive #BC2793 see here). 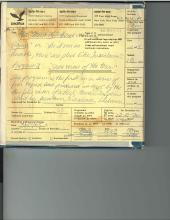