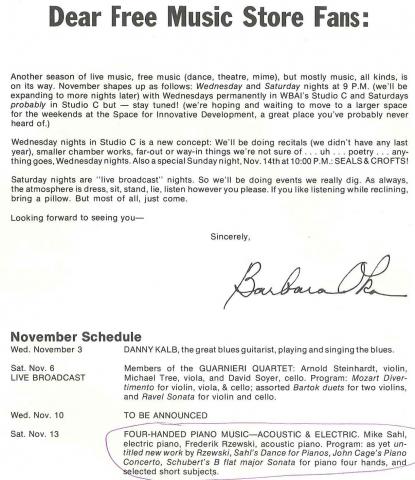 (Above: WBAI Folio, November 1971. The "as yet untitled" work is Les Moutons de Panurge.)

Although the Free Music Store began officially in 1969, this evening of four-handed piano performance is the earliest FMS recording that we have in the Archives. The performers for the evening of November 13, 1971 were Frederic Rzewski and Mike Sahl, who first perform their own compositions, followed by an arrangement of John Cage's Piano concerto for two pianos, and concluding with Frederic Chopin's Sonata in B-flat major for piano four-hands, op. 30. Born in Massachusetts, Rzewski was one of the founding members of the Italy-based experimental musical collective Musica Elettronica Viva (MEV) along with Alvin Curran and Richard Teitelbaum. In 1971 Rzewski moved to New York City. The first piece Rzewski performed this evening was his Les Moutons de Panurge, first written in 1968 and later released on the Opus One label in 1974, arranged for percussion instruments. Here, it is performed by Rzewski and Sahl in a duet for acoustic and electric piano, respectively.

Les Moutons de Panurge's title comes from the epic novel Pantagruel by Francois Rabelais in which the knave Panurge flings one of his sheep over the edge of his boat into the sea, feeling swindled by the merchant who had sold it to him; instinctively, all of the other sheep in the flock throw themselves overboard as well. Rzewski's musical output is marked by a radical political consciousness, evidenced in titles such as The People United Will Never Be Defeated! and in the piece Coming Together, which uses as its libretto an excerpt from Sam Melville's diary written shortly before his death in the Attica Uprising.

Moutons is a process-based composition, similar to contemporaneous works by Steve Reich and Philip Glass (both of whom, coincidentally, also performed at the Free Music Store). The melodic line is constructed note-by-note by the performers, each of whom jump in at chosen intervals, proceeding 1, 1-2, 1-2-3, 1-2-3-4, and so on, adding more and more notes until the 65th note in the melody is reached, at which point players work backwards from the beginning, playing notes 2-65, 3-65, 4-65, and so on until the final note in the sequence is reached by all of the musicians. At that point, the musicians are instructed to improvise. Rzewski's performance instructions dictate "if you get lost, stay lost", meaning performers should not try to find their way back if they lose their spot but forge ahead on their own paths, thus throwing the whole "flock" into disarray (a fairly easy proposition in the case of this intricate piece, especially when performed by larger ensembles). Due to its tricky construction, Moutons becomes a piece about error, the fallibility of the human performer and the herd mentality of the musical ensemble, treading the fine line between unity and chaos.

You can hear this piece, as well as the rest of the performance, over here at the Internet Archive.