The American Women two year project will both document the emergence and evolution of the Women's movement in cities across the United States, and the unique role listener sponsored non-commercial Pacifica Radio played by providing a communications hub to create and broadcast programs expressing their struggles, philosophies, and victories.

"It is gratifying to know these fragile reel-to-reel tapes silent decades will be rescued from deterioration and treated with the highest standards our National Archives demands," explains Brian DeShazor, Director of the Pacifica Radio Archives.

Heard on the first listener sponsored non-commercial radio network in the U.S: KPFA- Berkeley, CA; KPFK- Los Angeles, CA; WBAI- New York, NY; WPFW- Washington, DC; and KPFT- Houston, TX, and, many of the networks' 200 affiliate stations, the recordings are as relevant today as they were when they first were heard.

"We just want to be treated as human beings," said famed African American visionary Fannie Lou Hamer in a Pacifica recording made in 1961, "I'm fighting for human rights, not equal rights."

We can only wonder how our national culture might be now if we had heeded the wisdom of another leader of human rights, Betty Friedan. In a 1986 Pacifica recording, she fervently declares: "If we would now say that everyone should work shorter hours, so that women and men can now believe that parenting should be equal, they'd [both] have more time with their families..."

Hearing Bella Abzug's no-nonsense New York accent as she addresses an audience in 1981, reminds us of her relentless pursuit of women's equal engagement in Congress, long before Hillary Clinton, Madeleine K. Albright, Congresswoman Diane Feinstein, Elizabeth Warren, or other powerful women gained leadership roles in Washington, DC. Abzug teases her audience, "...and now we have the 'decade' of women...from '75- '85 is the 'decade' of women...I mean, who knows, if we behave, they may let us into the whole thing!"  The Honorable Senator Kirsten E. Gillibrand of New York comments in her letter supporting the grant application, "These audio recordings have become a part of American history, and it is important that Pacifica be given the necessary resources to ensure access to these valuable pieces of our history."

"The American Women Making History Project is expected to take 2 years to complete, and the recordings will be available for schools, museums, libraries and other non-profit educational organizations at no charge. This is the largest grant ever made to public radio for preservation of historic recordings. 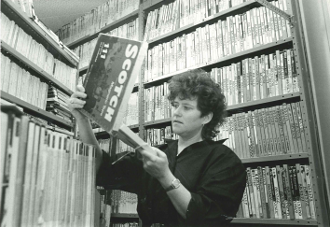 In order to secure funds for the archives, on Tuesday, August 20th, the five Pacifica radio stations will dedicate a day long broadcast to the preservation and access project and the recorded heritage it holds. Those wishing to contribute can listen and donate online at www.WomenMakingHistory.org.