Reading of letters written by a woman homesteader, Elinore Pruitt Stewart (1876-1933) in Wyoming around 1910. Part 2 of 3. These three episodes of Stewart's letters were part of a continuing series on KPFA based on women's diaries and letters. Part two: Stewart recounts her life on the ranches of her husband's and her own, the three children she bore to Clyde Stewart, camping trips in the mountains, and her stories of being a woman homesteading alone and succeeding.The materials used in this program came from "Letters of a woman homesteader" by Elinore Pruitt Stewart, published by the Houghton Mifflin Company, Boston. The letters were read by Luce Morgan; produced and narrated by Brett Vuolo; the music was provided by Larry Packer; technical production by Peter Zanger. Previously cataloged as BC0721B. 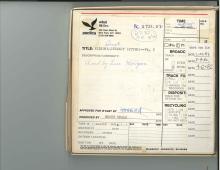