Feminist visual artist Judy Chicago, one of the founders of the Women's Building in Los Angeles and author of "Through the Flower" talks with Karla Tonella, KPFA, about her exhibit "The Dinner Party." In the making for five years, "The Dinner Party" is a major piece of sculpture that encompasses the history of western women from the beginning of time using traditional crafts and symbols as well as the new technology and feminist ideas. None of the controversy surrounding the project is discussed. Chicago explains that there are three parts to the project: the exhibition itself, the book she wrote that relates to, explains the piece, and is itself another expression of the information, and the film made by Johanna Demetrakas, who made the Womanhouse film and who had been filming the project for two and a half years and will produce a feature color documentary, which deals not only with the making of the piece but also the relationship between the past and the present and the experience of working on the project. Chicago also gives a full, illustrative description of the physicality of this exhibition, which premiered at the San Francisco Museum of Modern Art in March, 1979. They also discuss the status and experience of women in the art world. Interviewed and produced by Karla Tonella, February 1979. 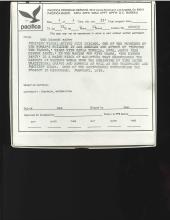